Now Will You Go?

Aimee and Roberta lived in New York with Aimee’s mother, Minnie Kennedy, and assisted her in raising money for the Salvation Army. It was there that Aimee met and married a Christian businessman named Harold McPherson. They had a son, Rolf Kennedy McPherson, and Aimee tried to settle down to a “normal” home life, but knowing that she was not being obedient to the call to preach the gospel began to wear on her and her physical health declined.

She had two major surgeries within a two-year period, but still continued to become weaker and weaker. Eventually she lay close to death in the hospital and the doctor called her mother in to say her last goodbye. As Aimee lay dying, God asked her one last time, “Now will you go?” She answered “yes” to God’s call and almost immediately she was healed. She never again questioned the call of the Lord to preach the gospel.

Harold and Aimee Semple McPherson began evangelizing and holding tent revivals on the East Coast of the United States that met with surprising success! Aimee prayed for people, and God honored her prayers and their faith. Thousands were healed. Thousands more became Christians. Life as traveling evangelists was difficult, however.

They washed their clothes in streams, and many nights were spent fighting off mosquitoes as they slept in train depots, leaky tents, or their car, often with very little to eat. Eventually, Harold decided that this was not the life he desired and he left Aimee in the middle of a campaign in Key West, Florida.

Sister Aimee continued to faithfully preach the gospel and people gathered in ever-increasing numbers to hear the remarkable lady evangelist. Within a year she was holding revival campaigns throughout the United States. The largest tents could not contain the crowds that gathered to hear her, so she rented the largest auditoriums in order to accommodate the numbers of people who attended.

People often stood in line and waited for hours so they could be assured of seats for the next service. In fact, some even hid in bathrooms and attics overnight so they could be at the next day’s services! In San Diego the National Guard had to be brought in to control a crowd of more than 30,000.

Sister Aimee’s sermons were not “fire and brimstone” messages; instead, her sermons showed the face of a loving God with continually outstretched arms. She spoke of serving Jesus as the only life that offered true fulfillment. She preached a gospel of repentance and believed strongly that everyone in the world had the right to hear the gospel.

Sister Aimee welcomed everyone. She preached to the social elite of the day and also reached out to the poor and to the disenfranchised members of society. She evangelized in the South at a time when segregation was rampant. She broke down racial barriers everywhere she ministered. Sister Aimee established many Hispanic ministries in Los Angeles and established ministries to German, Japanese, Czech, deaf, and other communities also. She recognized no gender, ethnic or status separation line.

When there were questions as to whether or not the miraculous healings people were claiming were real, the American Medical Association investigated. Their report stated that the work of Aimee Semple McPherson met with their approval in every way, and that the healings were “genuine, beneficial and wonderful.”

The City of Angels 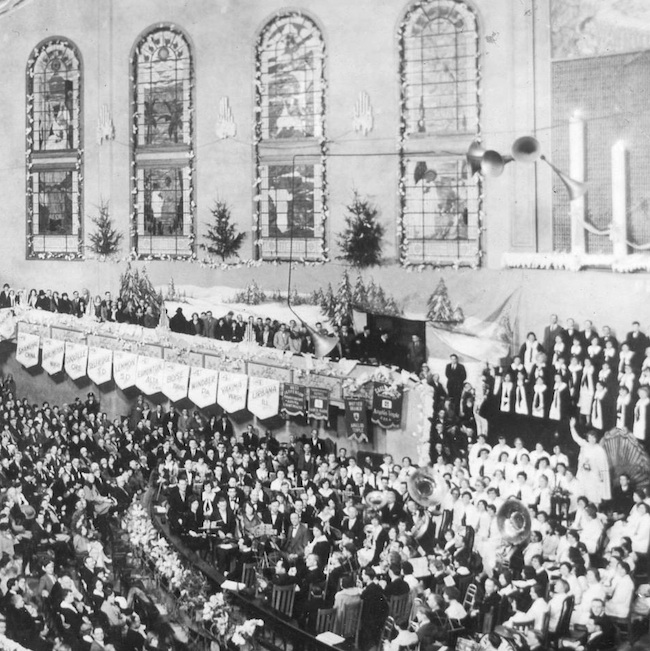 Weary of having no place to raise a family, Sister Aimee rejoiced when, in 1918, she heard God instruct her to go to Los Angeles. God told her He would build her a house in Los Angeles and He did, but really He built two houses—one for her family and one for His people.

For several years Sister Aimee continued to travel and raise money to build an interdenominational center for evangelism in Los Angeles. On January 1, 1923, when she was 32 years old, Angelus Temple was dedicated. The building held 5,300 people and was immediately filled to capacity at every service. The Temple became the spiritual home for thousands and a base for evangelistic ministry. What grew out of a desire to have a place from which to send forth the gospel quickly evolved into a church organization.

Sister Aimee developed an educational institution that trained people for ministry. Pastors were sent out, first to cities in California and then to all parts of the country. Missionaries were sent out to various mission fields and were supported by those who had caught Sister Aimee’s vision for reaching the world.

Sister Aimee always looked for creative ways to present the gospel. While holding a revival meeting in San Francisco in April 1922, she became the first woman to preach a sermon over the radio. Intrigued with the possibilities that medium seemed to offer for ministry, she built radio station KFSG, and soon her gospel messages could be heard via radio from Australia to the islands of Cape Verde just off the coast of Africa.