Sister Aimee had one of the most recognizable voices in the world in the 1920s. Civic leaders, politicians, actors and actresses, pastors from every denomination, as well as average citizens all attended her services. Her sermons were reprinted in hundreds of newspapers in Canada, the United States and Mexico—and were read by millions.

On Sunday evenings Sister Aimee presented illustrated sermons—stage productions—which often drew people who would never have thought to enter a church. In an era prior to television, these entertaining presentations attracted huge crowds and she used these messages to present to even more people the message of salvation through faith in Jesus. She believed that the gospel was to be presented at every opportunity and she truly used the means at her disposal to present the gospel to as many people as possible.

Sister Aimee’s impact was tremendous, and, because of her fame, in 1926 she was kidnapped and held for ransom. While this may sound odd to some today, during the mid-1920s in Los Angeles kidnappings were not uncommon. Prior to her kidnapping on May 18, Sister Aimee had been kidnapped twice and, there had been other threats on her life and other attempts to kidnap her. For example, in September 1925 threatening letters were delivered to the Temple; a man was arrested after he was captured by Angelus Temple workers who heard Sister Aimee scream when he broke into her parsonage. And in the fall of 1925 a woman named Mercie Stannard was arrested after threatening to kill her.

In early May of 1926, a high volume of letters and notes once again arrived at Angelus Temple threatening kidnapping. Then, on May 18, while working on a sermon at Ocean Beach, Sister Aimee decided to go swimming. When she came out of the water a couple asked her to accompany them to their car to pray for their dying baby who was in the back seat. This was not unusual; Sister Aimee made herself available to minister to people whenever and wherever she was called to do so. Upon leaning into the back seat she was pushed to the floor and sedated as the car drove off. A taxi driver saw the kidnapping as it happened and later told the authorities. 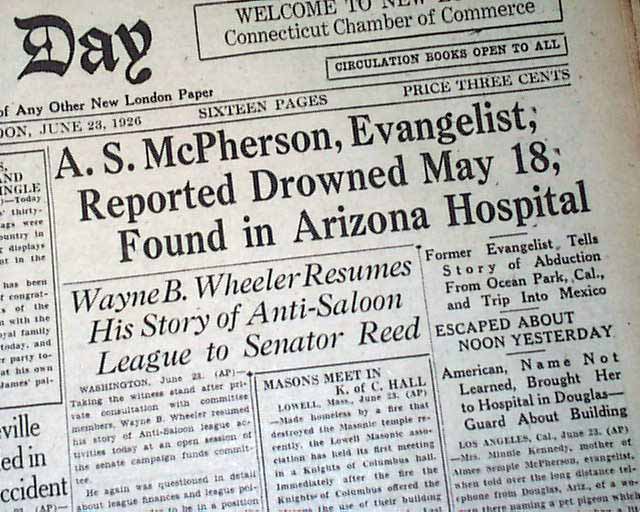 Almost everyone believed that Sister Aimee had actually drowned however, and when ransom letters came in from the
kidnappers, the letters were thrown away because her family thought she was dead! For three weeks Sister Aimee was kept in the Los Angeles area, and then, in mid-June, the kidnappers moved her to a small shack in an isolated canyon in Mexico just south of Douglas, Arizona. When the kidnappers left her alone but bound with rope for several hours while they drove off to buy supplies, she escaped and walked through the night to Douglas where she was entered into the hospital.

When Sister Aimee had gone missing, rumors of sightings came in to newspapers all across the country. She was reportedly seen in sixteen cities on the same day! When it was learned that an employee of Angelus Temple’s radio station who had left his job the previous December was in Carmel during the month of May, the media immediately began writing articles insinuating that Aimee faked her kidnapping in order to have an affair with him. A media circus erupted, and soon Sister Aimee found the district attorney working hard to try her on charges such as “conspiracy to commit acts injurious to public morals.” There was never a trial, however. During the preliminary hearings, the witnesses that the D.A. brought forth were either found to be untrustworthy or had their testimony soundly refuted. The charges that she had been in Carmel having an affair were also proven to be false when the two parties involved in the affair actually confessed to the judge. With the Carmel episode fully and undeniably explained and the rest of the witnesses’ testimonies thoroughly refuted, in January of 1927 the D.A. ceased his efforts to try Sister Aimee as a criminal, acknowledging that he did not have even one witness who could testify against her.

During the entire episode Sister Aimee continued to minister in Angelus Temple and publicly asked everyone to forgive any persons who were acting antagonistically toward her and to model Christ in their hearts, prayers, and attitudes.

Continuing her life in service to Christ, in 1927 she opened a commissary which had the purpose of feeding the impoverished as well as supplying them with clothing and other necessities. Each person was given physical nourishment, but was also given spiritual nourishment. Over the next several years and during the depression, it was through the commissary that more than one and a half million people were fed.

By 1931, Sister Aimee had been based in Los Angeles for thirteen years, and she had been raising her children as a single mother for longer than that. Harold McPherson had been granted a divorce and had remarried many years earlier. Both Roberta and Rolf married in 1931, and Sister Aimee found herself alone.

When Sister Aimee met David Hutton, the man who was to play the lead in her opera The Iron Furnace, she knew she was going to like him. Eventually love developed between the two, and he proposed. Since she was no longer bound to her prior husband, she said “Yes.” On the night of their wedding a newspaperman informed them that Hutton was being sued by another woman whom he had promised to marry! In July 1932 he was found guilty and was ordered to pay $5,000.

Upon hearing the news Sister Aimee fainted and fractured her skull. When she regained consciousness, she was told that her life had been hanging by a thread for two weeks. The fracture been life-threatening, but the doctors also told her that they had been treating her for a dangerous intestinal malady she had contracted during a trip to Guatemala. The ensuing months brought little improvement in her health, and it was decided that her health might improve if she took a cruise to Europe accompanied by a private nurse.

When she returned to the United States ready to join her husband in ministry again, the first person to greet her was a newspapermen informing her that Hutton had filed for divorce while she was gone and had started appearing in theaters with a show talking about his life being married to her. Though her heart was broken and human love had failed her, the love of God had not; in His strength she carried on in ministry and in reaching out to people in Jesus’ name—and God continued blessing her ministry. 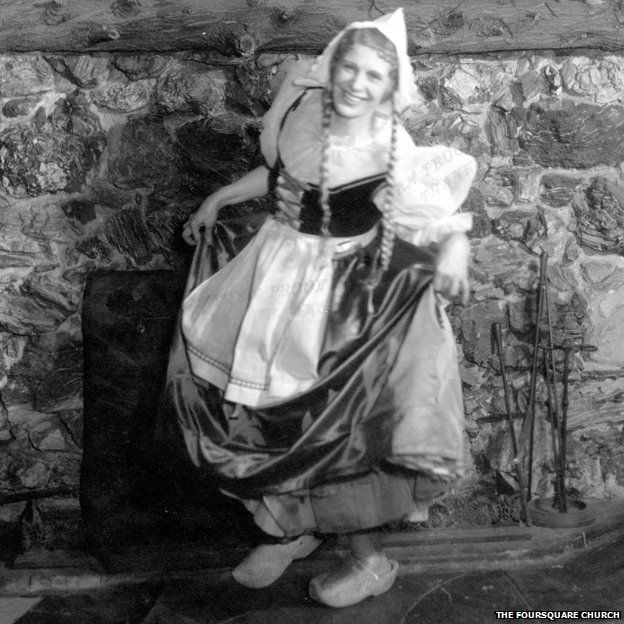 People still came by the thousands to be touched by God through Sister Aimee’s ministry. In one 150-day period she toured the country, traveled more than fifteen thousand miles, visited forty-six cities, broadcast on forty-five radio stations and delivered three hundred and thirty-six sermons, sometimes as many as five in a single day! In that one year she was seen by more than one out of every fifty people in the United States personally!

For the next decade Sister Aimee continued ministering and thousands of people continued to be healed and find salvation in Jesus each year. 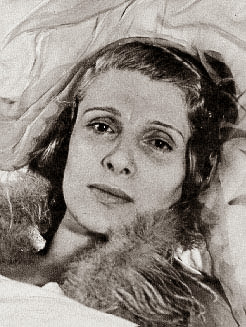 While ministering in Mexico in 1943, Aimee Semple McPherson contracted a bacillus that began eroding the walls of her intestinal tract. In May 1944, her son, Rolf, announced that she appeared to be improving. Although she had been ill many times over the previous ten years, including two occasions in which her family was told to prepare for her funeral, she had always recuperated. This time it was not to be. The tube running to her kidneys ruptured on September 27, 1944, after she conducted a revival service in Oakland, Calif.

Upon Sister Aimee’s passing, her son, Rolf K. McPherson, became president of The Foursquare Church providing stability, strength and growth to the denomination for 44 years until his retirement in 1988.